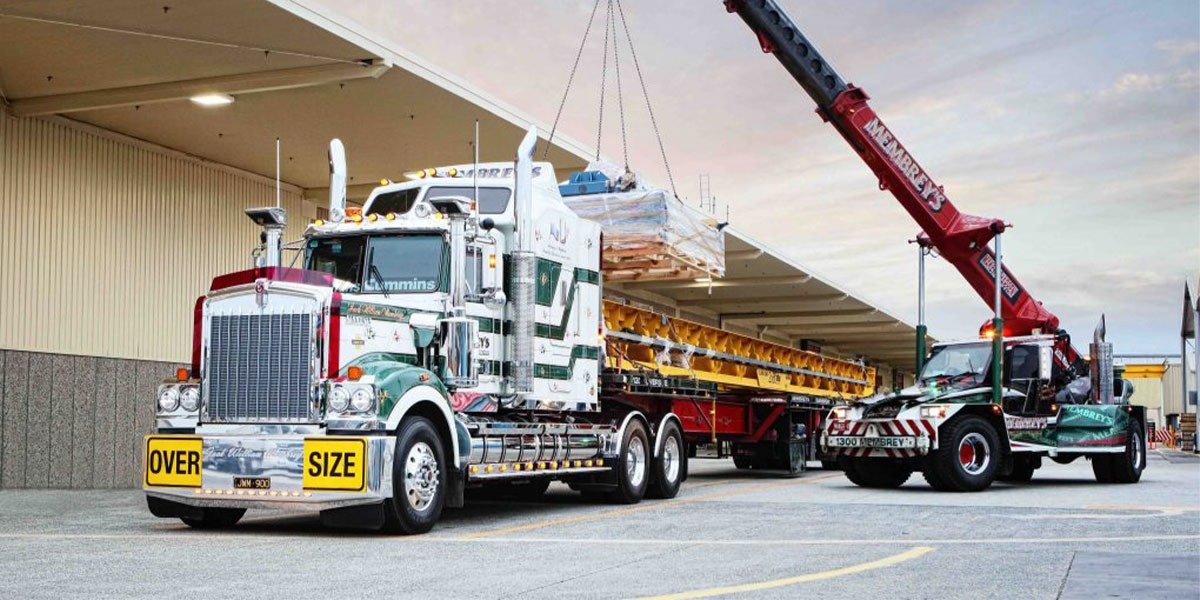 By its very nature, a bright green and shiny T900 Legend on the road is hard to miss. The striking features on this truck create more than just a pretty picture, and for Membrey’s Transport & Crane Hire, it is the personalised service from our team and quality customisation that keeps Managing Director, Craig Membrey, behind the Kenworth badge.

This Limited-Edition Kenworth Legend 900, affectionately named and sign written with ‘Jack’ on the rear of the cab (after Craig’s youngest son), is the second T900 in the Membrey’s fleet and this year celebrates its second birthday!

Since our team delivered the truck to the Membrey Family in 2018, this hard-working T900 Legend has hauled many bridge beams and other over-dimensional loads throughout Victoria and interstate. As specialists in complex and oversized freight, Membrey’s Transport & Crane Hire have been operating on our roads since 1962 and have owned in excess of 30 Kenworth trucks, with many still remaining in their fleet.

When we delivered their T900 in 2018, we knew it would be a special moment, so we captured the hand over to Craig and the Membrey family – you can check it out below.

THE MAKING OF A LOCAL LEGEND

Our team of Kenworth specialists have been assisting Membrey’s with the customisation and personalisation of their trucks for over 30 years.

Membrey’s original T900, built in 1995, was custom designed in collaboration with the Hallam Truck Centre team to commemorate Craig’s father, Jack William Hadley Membrey.  Several of the original specifications and features from the mid-nineties have carried through into the 2018 built T900 Legend but the new model includes a few more creature comforts!

Like their original T900, this T900 was produced as a one-off unique build at the Kenworth production facility in Bayswater, Victoria. Craig was very quick to have his company name penciled in for build number 29 in recognition of Craig’s youngest son Jack, who celebrates his birthday on October 29.

For the build, we knew we wanted to adapt the paint scheme from Craig’s 1995 model, but beyond this, we needed to consider the constraints of the job. Our Kenworth sales team worked with Craig to establish Membrey’s dimensional requirements, the size of the sleeper, fuel tanks, and the engine and driveline options needed to carry out over-dimensional freight transport up to 110T GCM. Craig’s other Limited-Edition truck is a 240T GCM “T909 Director” so the fleet didn’t call for another super heavy-duty truck at the time of ordering the T900 Legend.

We then established Membrey’s fuel and AdBlue requirements and Craig’s preferred tank and chassis layout. Additional chassis-mounted components like the Customair diesel powered sleeper air conditioner, which is mounted on the rear of the chassis on #29 Legend 900, were also locked in.

As part of the build, Craig wanted #29 to have a 50-inch modular Aero1 sleeper like that of the 1995 model. A custom Texas bumper bar was recommended in this instance, rather than a bulbar in order to maintain flexibility within the Membrey’s fleet and to satisfy overall length restrictions. Being able to customise a Kenworth wheelbase in 10mm increments further enabled us to hit Craig’s critical bumper to turntable dimension and fine tune the chassis layout.

The final chassis specification and paint scheme were signed off in Craig’s boardroom, as there’s nothing like getting out to a customer’s site to make sure we’ve covered all their requirements.

Our pre-delivery team in the Hallam Truck Centre workshop proudly managed the majority of the fit-up. This included our team of automotive electricians, as the truck was finished with some classic style lights and stainless trims in a nod to the previous era.

When asked about his decision to purchase one of the only 260 Legend 900’s being produced in Australia, Craig said “I love Kenworth, and what I love even more is to personalise things. This truck was a very special purchase to salute my youngest son Jack, who is building the same passion for Kenworth trucks. The custom build and paint job were handled with ease from the team at Hallam, who meticulously considered every single detail. This was even more appreciated when Jack was invited to visit the factory at Bayswater to sign his own name on truck, as the cabin was being built.”

From the whole team at Hallam Truck Centre, we wish this local Legend 900 a happy second birthday and many more safe years on the road!